My Rating: PG (for some violence)

For more photos, you can check out Mr. Myklusch’s Facebook: Jack Blank sketches

Plot: Jack Blank, a bullied orphan at St. Barnaby’s, has no friends but the comic books he smuggled away. He is hated by the teacher, the kids, the principal, everybody. Even the electronics hate him- whenever he is around, lights begin to flicker, bus engines stall. Life is extremely dismal, especially with no future but as a toilet brush cleaner. All that changes one day, when a robot from the comics he loves comes to life… with the intent of killing him. Shortly afterward, Jazen, an android from a bustling land called Imagine Nation, takes him away to that country- a place where every comic he’d read (and those he hadn’t) were real. But there are enemies lurking here too, and he can no longer run from them…

Cons: Slow; took about 30% of the book to finally pick up speed, and another 20% to get me interested.

Detail: I found The Accidental Hero really slow at first, like I mentioned above. I almost had to force myself to keep reading it, as I hate to leave an unfinished book. At around 30-something percent of the way through, The Accidental Hero started to get interesting enough for me to keep reading. Around 40 or 50%, I found I had to see what happened next! There were two plot twists near the end and I was like AAAAAHHHHhhhhh!!!!!! My favorite character was Allegra. She sounds like someone I would like to be friends with- modest, hidden courage, and she chooses friends carefully.

I recommend this book to the age range 10 or 11 years old and up (I don’t like to say a maximum age, because you are never too old to read a book!!)

Will I finish this series? That remains to be determined…

Gabby Wels is my psuedonym. I am an amatuer writer who is also obessed with books. I like real books over ebooks, but I'll admit that it's easier to carry several ebooks on a kindle than carry several hard copy books in a bag. :) Have a wonderful rest of your day and thank you for stopping by! View all posts by GabbyWels

This site uses Akismet to reduce spam. Learn how your comment data is processed.

Recent Posts from My Other Blog: Gabby's Gabbing

We only have one more Part left after this… I’m feeling kinda sad! ;(  Thank you again for reading my fan fiction! 🙂

Previously: Delilah and Clint Barton moved to the New Avenger’s Facility after rescuing Ventrice from HYDRA agents. The next day, Clint slipped away without telling anyone. Delilah began training with her father’s bow. Also, wanting to feel closer to her family, she put on a friendship necklace from her sister… without having a panic attack. 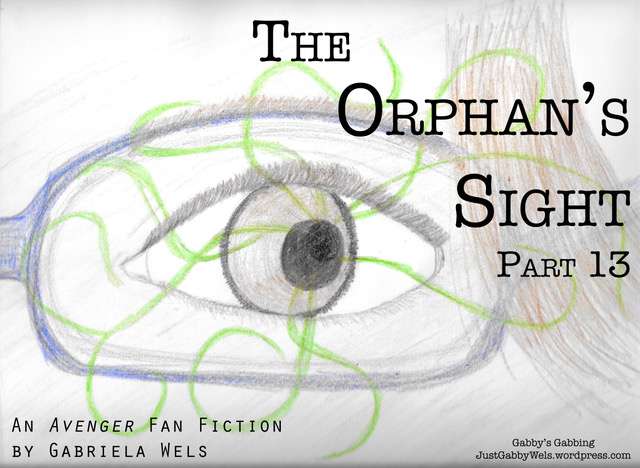 Previously: Clint, Natasha, Mbali,  and Bruce set out to rescue Ventrice from a hidden HYDRA base. Delilah, disobeying her father, snuck after them. She was able to aid them for a few minutes before striking her head and passing out. She woke up and learned the rescue mission had succeeded.

This part is short, since I wanted it to end on a happy note… because after it… we’re in Endgame! AaaaHHH!!!! 😉 (Stay tuned for a Thursday post!!) Previously: Despite her father’s warnings, Delilah followed the rescue party. Ventrice had been brainwashed to follow trigger words, and Delilah tried her hardest to make her snap […]